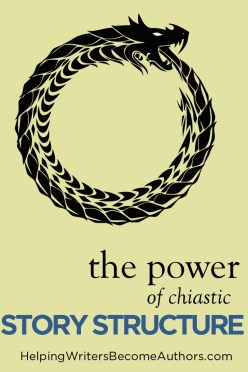 The Power of Chiastic Story Structure (Especially in a Series)

When writers put on their story theorist caps, nothing is more exciting than those moments when you get to recognize consistent patterns emerging within obvious story forms. This is the basis of all of our understanding (and musing) about story, including the chiastic story structure we’ve been studying these past few months.

Although writers sometimes think of story structure as something external (and therefore rather arbitrary) that we impose on a story in order to make it look a certain accepted way, it is actually just the opposite. Story structure, in all its many posited forms, is simply a record of the long-recognized patterns that have emerged from humankind’s millennia of stories.

By a certain point in the pursuit of story, most writers become familiar with what is now considered the “standard” Three-Act Structure. But as we’ve been exploring in this little series, another lesser-known pattern that emerges from this foundation is that of chiastic story structure. Sometimes called “ring structure,” a chiastic structure is one in which the two halves mirror each other in reverse order—in essence coming full circle.

In the last five posts, we’ve explored how all the major beats recognized in the Three-Act Structure are in fact inherently chiastic. We find important structural and symbolic links between all the following:

And we also find a linked or mirrored structure inherent within itself at the story’s central pivot:

Now that we have examined the chiastic links between all the major structural beats, I want to close out the discussion with an overview of chiastic story structure itself, along with a look at how you can employ this technique over the longer work of an entire series.

What Is Chiastic Story Structure?

As stated, chiastic structure is a literary technique of repetitive symmetry, designed to create insight and resonance through both comparison and contrast. We can witness chiasmus as a common technique in poetry, employing the pattern of “A, B, B, A” (and so on). It can also be used most simply on the sentence level, as we see in such famous sentences as:

“All for one and one for all!”–Alexandre Dumas

Chiastic structure is perhaps most famously recognized from ancient religious texts, including the Bible. Wikipedia shows the Genesis account of the flood to be structured like this:

Other ancient texts such as Beowulf and The Iliad can also be seen to demonstrate chiasmus, both structurally and narratively. More recently, many analyses have shown that the great cohesion and resonance of the Harry Potter series is thanks largely to its chiastic structure. Of course, as we’ve been exploring throughout this series, any story that adheres to classic structure is, in fact, offering at least a nominal chiastic structure.

Why is chiastic story structure so prevalent and, clearly, so powerful? There are many reasons, not least the fact that it provides plentiful opportunities to use the potent tools of comparison and contrast to deepen thematic weft, sometimes overtly and sometimes subconsciously. Moreover, chiastic story structure all but ensures a story will emerge cohesive and resonant. If all its major pieces are connected, then necessarily they will be all of a whole. They come together, even in their variation, to create a unified big picture.

Like any storytelling technique, chiastic structure can be applied too overtly and become on the nose. You don’t want the links between your story’s halves to feel repetitious, nor do you want them to be obviously “matchy-matchy.”

You can see how wonderfully successful and resonant (and yet not “matchy” or on the nose) chiasmus is in the Harry Potter series simply in recognizing the link between the series’ beginning and ending.

This is chiasmus at its absolute most basic within this series. The series utilizes a linked structure almost perfectly scene by scene in every book, as well as over the course of the entire series. Many people have written about this extensively, including in this graphic.

4 Tips for Implementing Chiastic Structure in a Series

In past posts, we’ve already talked about how you can employ a chiastic structure in standalone books simply by ensuring they are classically structured. Understanding how the story comes full circle in this way allows you to strengthen the mirroring elements throughout both halves of the book. But as we’ve already seen in the reference to the Harry Potter series, you can also utilize chiastic structure to powerful effect by applying it to the overarching structure of a longer series of books. Although the same basic principles apply to series structure as to standalone structure, here are a few particular tips to keep in mind when creating chiastic story structure for a series of books.

1. Know the Ending in the Beginning

Whether or not you outline your story before the first draft, at some point you must know how your story will end. And when you know how it will end, you must go back to make sure this ending is reflected in the beginning. (You can see more about the specifics of how to do this in the previous posts on the link between the Hook and the Resolution and particularly the link between the Inciting Event and the Climactic Moment.)

This is especially important in writing a series of cohesion and resonance. Unfortunately, foreseeing the ending is much harder to do in a series than in a standalone book. Most of us write the first book with little or no true understanding of precisely how the series will end. So what can you do?

The most obvious solution is to outline the entire series before you start writing the first book.

You can also try to implement the chiastic effect as you go by mirroring the second half to the first (rather than the other way around). This can work, but it can also be difficult to pull off soundly since the most important moment in the story is the ending. It’s usually easier to create a resonant plot from a beginning that mirrors the ending, rather than an ending that mirrors the beginning (although the MCU did it rather handily).

Regardless your approach, try at least to gain a firm sense of how many books will be in the series. An odd number, such as the classic three books of a trilogy or the seven books of Harry Potter, offers the most ease for constructing a chiastic structure, since there will already be an inherent symmetry to the books, with one book (the second or the fourth in these examples) standing out as the obvious Midpoint of the series. If you don’t know which book will be your story’s centerpiece, you’ll have difficulty consciously structuring the series in a chiastic way.

2. Make Use of the Series’ Innate Structural Chiastic Offerings

Any overarching series is essentially a single story. As such, this overarching story will offer an inherent story arc of its own, following all of same foundational beats that are found in each individual book:

The timing may be slightly different in the series than in the standalone books, but the basic structure holds true. This means that just as an individual book’s structure is inherently chiastic, so too is the overarching story of any series. In the same way as you can mine this inherency to magnify the chiastic effect in a standalone, you can also mine it from the series as a whole with just a little careful conscious attention to the natural links between structural beats.

There may be times when a series won’t allow you to perfectly execute chiastic scenes at every single structural beat. (This isn’t “ideal,” of course, but let’s be realistic…) Although chiasmus is most powerful on the plot level—when the events of linked scenes pay each other off in important ways that move the story forward—you can still communicate the concept of symmetry to readers on subtler level.

In fact, even when your chiastic plot structure is perfect, underlining it with additional symbolic symmetry will only strengthen the effect. Think about the visuals you have chosen for each of your linked structural beats. How can they mirror each other? Pay special attention to symbols, colors, settings, characters who are present, even invisible “Easter eggs”—hidden symbolism that only the most perceptive readers will even notice at all.

Finally, remember that chiasmus evokes meaning not simply through creating obvious links or “sameness” between structural beats, but most importantly by contrasting them. Chiasmus creates the effect of “mirror images” between the halves of a story—which means the images are reversed from one side of the story to the next.

This is reflected most obviously in the protagonist’s character arc: perhaps in the beginning he believed a Lie, but in the end he believes the Truth. You can utilize this “reversal” in many ways, not just to avoid repetition but to emphasize the progression and the dynamic change that is happening from one half of the story to the next. In considering how you can create resonant links between the beats in the first and second halves of your story, look not just to comparisons but to blatant contrasts.

Thanks so much to all of you for your enthusiasm in joining me on this journey through this beautiful layer of story theory—chiastic story structure. I started this series as what I thought would be a standalone post, in response to a question from one of you about this mysterious link I’m always talking about between the Inciting Event and the Climactic Moment. But your passionate interest in the subject led me to expand it into this six-part series, and I’m so glad you did because I’ve learned an incredible amount along the way myself.

All the best with your chiastic structures in your own stories!

Wordplayers, tell me your opinions! Do you think you’ll ever attempt chiastic story structure in a series? Tell me in the comments!

The post The Power of Chiastic Story Structure (Especially in a Series) appeared first on Helping Writers Become Authors.