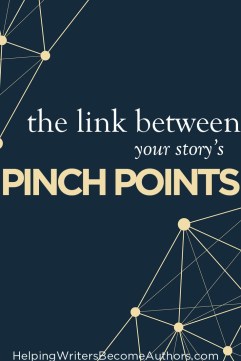 The Link Between Your Story’s Pinch Points

Of all the paired structural beats in a story, the Pinch Points are perhaps the most obvious. There are only two of them, they have the same name, and they perform essentially the same function in both their first and second iteration. They’re also perhaps the least known and most confusing of all the major turning points in classic story structure.

Today, we’re continuing our series about “chiastic” structure—which refers to the idea of the second half of a story mirroring the first. Although this effect can be created in more obvious and deliberate ways, it is always present within the actual structure of a story. In the first post, I talked about how it’s sometimes more helpful to think of story structure not as an arc but as a circle, in which one half mirrors the other with the ending circling back upon the beginning.

However, their timing alone tells us the Pinch Points bear an equal load with all the other major turning points in a story. In fact, along with the Midpoint, they are the only major turning points entirely contained within the Second Act. This means, for one thing, that they are key factors in avoiding a sagging middle to your story.

How do they do this? Other than simply moving and turning the plot, the chief function of the Pinch Points is to reinforce the antagonistic force’s presence and raise the stakes. They make the protagonist feel the “pinch” of the rising conflict.

Structurally Speaking: What Is the First Pinch Point?

The First Pinch Point occurs at approximately the 37% mark. This is halfway between the First Plot Point (which ended the First Act) at the 25% mark and the Midpoint at the 50% mark. Like all the other beats, its primary function is to turn the plot in some way. Something major happens that changes the conflict and the protagonist’s approach to dealing with it.

Specifically, both the First and Second Pinch Points turn the plot in a way that emphasizes the antagonistic force’s ability to create obstacles—thereby raising or emphasizing the stakes. There are many ways to do this, depending on the type of story you’re writing:

In fact, the use of clues is inherent to both the Pinch Points, since these beats must also function to powerfully set up the major revelations that will occur at their subsequent beats. For the First Pinch Point, this subsequent beat is the Midpoint, which includes the Moment of Truth—arguably, the single most catalytic revelation in the protagonist’s character arc if not the plot as well.

In the first half of the Second Act, the protagonist will still be in a “reactive” phase—or what screenwriter Matt Bird refers to as “trying the easy way.” The Midpoint will mark a major transition into the “active” phase, or “doing things the hard way.” But you can’t just have the protagonist bumble along all through the first half, only to completely change his perspective and mode of action at the Midpoint. You have to build up to it—and the First Pinch Point is critical for accomplishing this.

As you can see in the graphic below, the section of the story between the First Plot Point and First Pinch Point is the “reaction” phase, in which the protagonist is behind the ball as she tries to adjust to the new paradigm in which she finds herself.

Structurally Speaking: What Is the Second Pinch Point?

The Second Pinch Point mirrors the First Pinch Point by occurring at approximately the 62% mark, halfway between the Midpoint and the Third Plot Point (which will begin the Third Act at the 75% mark). Other than timing, there is little technical difference between the two Pinch Points.

Like the First Pinch Point, the Second Pinch Point is a turning point designed to emphasize the antagonistic force, raise the stakes, and foreshadow the next major revelation at the Third Plot Point. As we discussed last week, the Third Plot Point is the “low moment” within both the character arc and the plot. The Moment of Truth at the Midpoint was when the protagonist first saw and accepted the power of the Truth, but he did not yet give up on the Lie He Believes because he did not yet understand that the Lie and the Truth are mutually exclusive. The Third Plot Point is where he will have to reckon with this incompatibility. The Lie-believing part of him must die and, if he is following a Positive-Change Arc, he must then be reborn in the Truth.

Usually this change at the Third Plot Point is catalyzed within the plot via revelations about the external conflict. Just when the protagonist thinks he is about to win the day, he suffers his greatest (or at least most symbolic) defeat yet. This defeat could be literal, or it could simply be a shattering revelation—such as that the antagonist has a huge army and a foolproof plan for winning.

We can identify several similarities between your story’s First Pinch Point and Second Pinch Point:

One of the most important structural jobs of the Pinch Points is to offer clues about both the plot conflict and the thematic philosophy. These clues will introduce plot-changing information. The protagonist may be told about something (e.g., someone tells him a secret), or he might witness something (e.g., finding another murder victim), or he might be involved in a plot-changing event (e.g., the antagonist launches a surprise attack).

For Example: In Eternal Sunshine of the Spotless Mind, the protagonist (who is undergoing treatment to erase memories after a painful breakup) experiences significant memories at both the Pinch Points, first of his ex Clementine confronting him (in a “pinch” from the antagonistic force of his own commitment issues), then of being chased by the doctor who performs the treatment (and who thereby embodies the antagonistic force).

In many ways, the above “clues” are the foreshadowing, via which the Pinch Points set up their subsequent turning points at the Midpoint and Third Plot Point. But you can also use any standard form of foreshadowing to lay the groundwork for the major moments to follow. This might take the form of the protagonist creating a plan which will be put in motion at the subsequent beats. Or it might be subtler and more symbolic. Or it might even be foreshadowing in reverse—by way of misdirection and irony.

For Example: In Studio Ghibli’s Howl’s Moving Castle, the Pinch Points emphasize both the antagonism of the war and Howl’s inner demons. The First Pinch Point follows up a scene in which the protagonist Sophie witnesses warships with a scene in which Howl has a meltdown, revealing what he believes is his true cowardly nature. The Second Pinch Point shows Howl returning from a fight with the enemy, in which he took the shape of a bird and is now, symbolically, in danger of turning into that monstrous shape forever.

Via all of the above, the Pinch Points must function to emphasize and/or raise the stakes. Whatever is at stake for the protagonist in the main conflict will come under fire at the subsequent beats of Midpoint and Third Plot Point. The Pinch Points offer the opportunity to remind the readers (and the characters) just what is on the line should the protagonist fail or mess up (which he inevitably will).

For Example: In The Man Who Shot Liberty Valance, both of the Pinch Points emphasize the titular antagonist’s violence—and therefore what is at stake for the protagonist Rance Stoddard if he persists in opposing Valance to ratify statehood for an unnamed western territory. In the First Pinch Point, Valance is off-screen, but Rance receives news that Valance is killing farmers who are voting in favor of statehood. In the Second Pinch Point, Rance’s friend and employer, the editor of the local newspaper, is savagely beaten by Valance and his cohorts.

1. How Will the Pinch Points Set Up the Major Revelations at the Moment of Truth and the Low Moment?

2. How Will the Pinch Points Foreshadow the Midpoint and the Third Plot Point?

If you plant clues at your Pinch Points, you’re already foreshadowing the subsequent beats. But think about how you can deepen the effect. Beyond the revelations themselves, what else happens at the Midpoint and Third Plot Point that needs to be set up? The Midpoint and Third Plot Point are two of your major set-piece scenes/sequences. As such, they usually require a little preparation whether you’re going to be writing about a battle or a ball.

3. How Can the Antagonist Be a Presence at the Pinch Points?

4. How Can You Use the Pinch Points to Increase the Stakes and/or Remind Readers What Is Already at Stake?

Stories are built on stakes. If nothing were at stake for the protagonist, she wouldn’t be on this journey. Those stakes should be present by implication in every scene, but the Pinch Points are the places to remind readers of exactly what the protagonist stands to lose in the conflict. Even better, since the Pinch Points are turning points which must move the plot, use them to raise the stakes in ways that foreshadow the coming confrontations at the Midpoint and Third Plot Point.

Next week, I’ll be launching my new book Writing Your Story’s Theme (yay!). Two weeks from now, we’ll examine how the Midpoint acts as the pivot for all the partnered structural beats in the first and second half of the story. Happy writing!

Previous Posts in This Series:

Wordplayers, tell me your opinions! How do your First Pinch Point and Second Pinch Point serve to set up their subsequent beats in the plot? Tell me in the comments!

Click the “Play” button to Listen to Audio Version (or subscribe to the Helping Writers Become Authors podcast in iTunes).

Love Helping Writers Become Authors? You can now become a patron. (Huge thanks to those of you who are already part of my Patreon family!)

The post The Link Between Your Story’s Pinch Points appeared first on Helping Writers Become Authors.