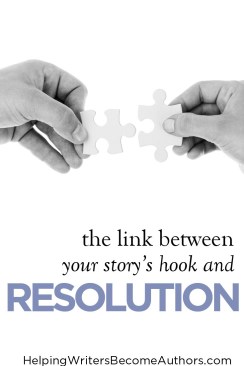 The Link Between Your Story’s Hook and Resolution

On a theoretical level, art often comes down to patterns. As readers and even writers we are not always conscious of these patterns, but whenever we are able to recognize that a story works—or does not work—usually what we are responding to is the comparative effectiveness of certain underlying patterns. This is perhaps nowhere more obvious than in story structure.

A few weeks ago, in response to a query from a reader, I posted about “The Crucial Link Between Your Story’s Inciting Event and Climactic Moment,” in which I talked about how story structure can be viewed not just as an “arc” but in fact as a full circle. All of the major structural beats in the first half of a story can be seen as corresponding in important ways to their “partners” in the second half of the story.

Specifically in that post, I discussed the causal and catalytic link between the Inciting Event in the First Act and the Climactic Moment in the Third. Since quite a few of you were interested in exploring the links between the other paired beats, today will be the “official” beginning of a quick series on each of these important structural pairings. Obviously, I’ve gone a bit out of order, since I started with the Inciting Event/Climactic Moment, so today we’re taking a step back to explore the Hook/Resolution.

But first, let me repeat what I said in the last post: Don’t let this view of story structure seem too daunting or over-complicated. If you understand the function of each of the major structural beats, you’re probably already instinctively pairing them. From there, deepening your conscious awareness of what you’re doing will help you troubleshoot problems and bring additional cohesion and resonance to your story.

Structurally Speaking: What Is the Hook?

The Hook is the first beat within your story. Essentially, it is the beginning. It may not literally be the first moment or sentence in your story, but since it is the first truly interesting and momentum-creating beat within the plot, it should be offered to readers as soon as possible. As its name suggests, it is the beat that not only kicks off the story but that should hook your readers’ interest and pull them into reading the rest of the story.

On a deeper level, the Hook proper and its subsequent scenes throughout the first half of the First Act (leading up to the Inciting Event), will function to tell readers what this story is about and to set up all the important playing pieces for later beats. Hooks are one of the trickiest of all beats simply because they must successfully meld entertainment and information. This can, of course, be said of every other scene in the book, but there is less margin for error in the Hook than anywhere else, since this is your first and possibly last chance to convince readers your story is worth their time and effort.

Writers are often confused about how this first story beat—this first domino in the story’s row of dominoes—relates to the main conflict. The Hook, and indeed the entire first half of the First Act, precede the Inciting Event/Call to Adventure when the protagonist is specifically invited to engage with the conflict.

The job of the Hook and its immediately subsequent scenes is to introduce the protagonist in his or her current predicament and Normal World. The Hook introduces the place—whether literal or metaphorical—from which the protagonist will embark.

Structurally Speaking: What Is the Resolution?

Depending on the story and how many loose ends remain to be tied off, the Resolution may be a very short scene or even several chapters. The Resolution is the time to resolve any remaining questions about supporting characters and subplots. Even more importantly, the Resolution comes full circle, harking back to the Hook to show how the characters and their world have changed since the beginning.

(This article doesn’t discuss the Second Act, but here’s the link to the corresponding Second Act Timeline graphic if you’re interested.)

You can think of the link between your story’s Hook and Resolution in a few different ways:

The Hook and the Resolution are the most passive of all the structural beats (which is not to say they should lack momentum or motion). As such, their framing of the entire story is often more “aesthetic” than causal. They mirror each other literally and symbolically, showing both how things have changed and how they remain the same. Setting offers one of the most powerful aspects of this symbolism. Your story will open with your characters in a Normal World—which they will leave or change over the course of their conflict. The story will end with a literal return to that same world or the entrance into a new setting altogether or a demonstration of how that world has been forever changed. Symbolically, the Resolution shows us a new Normal World.

For Example: The Harry Potter books almost always open with Harry in his Normal World with his horrible Muggle aunt and uncle. The first book ends with him headed back to that world from his New World at Hogwarts, having found and claimed a new family. The series as a whole ends with him still in the Muggle world, but now himself the loving parent sending his own children off to Hogwarts.

For Example: In the Marvel Cinematic Universe, Tony Stark’s opening Characteristic Moment in Iron Man showed him to be an arrogant, irresponsible smart-mouth. He ended that movie with an iconic show of bravado when he declared to the world, “I am Iron Man.” [SPOILER] This would eventually come full circle into a tremendously powerful closing Characteristic Moment when he sacrificed his life for others. He dies by again saying, “I am Iron Man”—but this time it is a statement of responsibility rather than irresponsibility.[/SPOILER]

Obviously, the plot is going to come full circle as well—beginning in the Hook and ending in the Resolution. But more than that, the Hook should also contain some kind of ending—of what has come before—and the Resolution some kind of beginning—for what will come after. Story structure offers a tidy unit of containment for life, but the pattern continues to spiral beyond the story itself. We can also see this in the idea that “the end is in the beginning.” Whatever will happen in the story’s end must be foreshadowed and set up from the very beginning—if only symbolically and structurally.

For Example: In the original Star Wars trilogy, Luke’s daddy issues are established in the very First Act. In A New Hope, this seems to be nothing more than the setup for a personal reason to hate Darth Vader, the villain who “killed” his father. After the shocking revelation that Vader is Luke’s father, the final confrontation in the end of the trilogy ends up hingeing entirely on this father-son bond and the transformation of both characters. Darth-as-Luke’s-father would not have worked were it not set up in the very beginning of the story.

All of the above can be mined for latent symbolic opportunities. But you can also employ purposeful symbolism. Indeed, if none of the above seem like clear options (or if they seem too on-the-nose), you can still link your Hook and Resolution simply through some kind of repeated motif. This can be repeated imagery, dialogue, or narrative. It doesn’t have to be elaborate or obvious. Even something subtle can successfully bring your story full circle.

For Example: Gladiator opens with the protagonist imagining his wheat fields in Spain and rubbing dirt into his palms before a battle. It ends, after his death, with him again running his hands through wheat as he is reunited with his wife and son in the fields of Elysium.

7 Questions to Help Link Your Hook and Resolution

1. What Setting(s) Will Best Dramatize the Story World’s Comparative Condition at the Beginning and End of the Story?

When considering your story’s main settings, spend some extra time on the first one. Your protagonist’s Normal World in the beginning may be a setting from which he embarks on the rest of the story, or it may be the central setting for the entire story. Regardless, consider how the setting or sub-setting in the Hook’s opening scene can show the pros, cons, and social dilemmas that will set up your protagonist’s impending need to engage with the conflict.

2. How Can Your Protagonist’s Final Scene Hark Back to the First Scene?

Your protagonist may be in an entirely different physical setting by the end of the story. Even if this true, consider how this final setting will reflect back upon the first one. How are they the same? How are they different? The mere act of comparison and contrast can create powerful symbolic framing.

3. How Can the Hook Indicate Forward Progression While Hinting at the End of Something Previous?

Your Hook should introduce your character already (or almost) in motion, headed toward a meeting with the story’s main conflict. But it should also indicate that wherever your character is moving toward, she is also moving away from something. What has happened just prior to this scene? There is no need for lengthy backstory revelations (indeed: don’t), but creating a sense of forward progression requires at least the sense of a causal progression starting even before the first chapter.

4. How Can the Resolution Signal Completion While Indicating the Beginning of Something New?

Consider how your Resolution scene can tie off any salient questions and loose ends—without tying everything off too perfectly. What changes will your character have to adjust to in the aftermath of the Climax? It may be he’s getting married, or it may be he’s been banished to a new setting. There’s no need to telling readers anything about what will happen next; but there is a need to promise that something will happen—that the characters’ lives will go on spinning.

5. How Will the Hook Introduce the Thematic Lie?

One of the most important tasks of your Hook scene(s) is to set up your story’s thematic Lie. This is the Lie Your Character Believes at the beginning of the story. It is the Lie represented by your story’s Normal World. In many ways, the Lie and its effects will be the reason your character ends up engaging with the antagonistic force. By sowing that Lie into the very beginning of the story, you will achieve the effect of the “ending in the beginning.”

6. How Will the Resolution Underline the Thematic Truth?

The Lie’s introduction in the First Act will come full circle by the story’s end. The protagonist will either have positively arced into a belief of an opposing Truth, or she will have devolved into a deeper Lie. Either way, the Resolution should mirror the Truth back to the Hook’s Lie. Even if the protagonist arcs negatively, the Resolution will at least hint at the Truth in an ironic way.

7. Can You Think of a Thematic Motif That Can Come Full Circle?

Although not required, you can deepen the mirroring effect of Hook and Resolution by developing a thematic motif that can be referenced in both. The motif does not have to be repeated exactly, but even a related thematic visual (e.g., a sunrise in the beginning and a sunset in the ending) can subtly signal that the story, its conflict, and its theme have come full circle.

Next week, we’ll take a look at the important similarities that link the First Plot Point and the Third Plot Point. Happy writing!

Wordplayers, tell me your opinions! What are some ways in which your Hook and Resolution mirror each other? Tell me in the comments!

The post The Link Between Your Story’s Hook and Resolution appeared first on Helping Writers Become Authors.