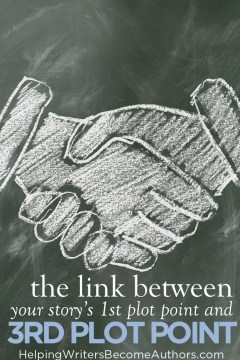 I often talk about cohesion and resonance as being two of the most important qualities of great stories. Many factors are involved in achieving these effects, but one of the subtlest and yet most powerful is found within the structure of story itself. This is the hidden “circle” of story structure, in which all the important beats in the first half can be seen as foreshadowing for their “partner” beats in the second half.

Over the last few weeks, we’ve been examining the idea that story structure can be viewed not just as an arc but as a circle.

In some ways, these plot points are less partners and more part of a triangle, along with the Midpoint. The First Plot Point marks the end of the First Act and the beginning of the Second Act, around 25% of the way into the story. The Midpoint halves the story and the Second Act at the 50% mark. And the Third Plot Point ends the Second Act and begins the Third Act, around 75% of the way into the story. In short, these three major plot points mark the quarter points within the story, with the Midpoint acting as the central fulcrum between all of the structural pairings.

These three plot points are the “big money” moments in your story. They are the set-piece scenes/sequences in which the biggest and most important action takes place. Although all the main structural beats are important and act as significant turning points within the story, it is the plot points that carry the most weight.

Because we are talking about “linked” structural beats and because the Midpoint has no actual partner, we’ll discuss it in a post of its own at the end of the series. For today, we’re going to specifically examine some of the parallel functions of the First Plot Point and the Third Plot Point.

Structurally Speaking: What Is the First Plot Point?

The First Plot Point is the first major turning point within the story in that it signifies the end of the Normal World in the story’s First Act and the beginning of the main conflict in the Second Act. It occurs approximately 25% of the way into the story.

The First Plot Point is preceded, halfway through the First Act at the 12% mark, by the Inciting Event. As previously discussed, the Inciting Event is where the protagonist first “brushed” with the main conflict by receiving a Call to Adventure. But this Call to Adventure was resisted in some way. For many possible reasons, the protagonist wasn’t willing or able to immediately accept the Call.

In short, the Inciting Event initiates in the protagonist a growing awareness of the desire that will become his plot goal, the obstacles presented to him in chasing after it, and the stakes for him whether he pursues it or not. The protagonist, however, has not yet committed himself. He can still walk away from the Inciting Event. Indeed, for the remainder of the First Act, he may be trying his level best to do just that.

The Hero With a Thousand Faces by Joseph Campbell

And then comes the First Plot Point. The First Plot Point is what Joseph Campbell called a “threshold.” More popularly, we often refer to it as a Door of No Return. It is an event that forever alters the protagonist’s world. Whether of her own volition or not, she commits to her plot goal—and thus the main conflict. When she takes this step out of the Normal World (perhaps literally and physically, or perhaps just symbolically), she is taking a step she will never be able to reverse. Even if she is to physically return to the Normal World later in the story, she will find that either herself and/or the world is forever altered in some way.

Writers sometimes get confused about the different roles of the Inciting Event and the First Plot Point, since both seem to initiate the main conflict. They are, of course, both inherently related to this initiation, but the one leads into the other. The best way to understand the difference is to think of the Inciting Event as setting up the irrevocability of the First Plot Point.

Structurally Speaking: What Is the Third Plot Point?

Just as the First Plot Point begins the Second Act, the Third Plot Point ends it—and begins the Third (and final) Act. The Third Plot Point should take place at approximately the 75% mark. It signifies a final major turning point, this time into the ultimate confrontation between the protagonist and the antagonistic force to decide the outcome of the conflict and whether or not the protagonist will gain his plot goal.

(For clarity’s sake, you’ll want to note that many writing instructors refer to this as the Second Plot Point—while giving the “Midpoint” no other title. Either way, what is being referenced is this gateway to the Third Act at the 75% mark.)

Even within plot-centric stories, the symbolism inherent within the Third Plot Point represents the protagonist’s struggle to come to terms with his actions and losses in the Second Act and to determine what he is willing to do to gain his plot goal in the Third Act.

(This article doesn’t discuss the Second Act, but here’s the link to the corresponding Second Act Timeline graphic if you’re interested.)

You can think of the link between your story’s First Plot Point and Third Plot Point in a few different ways:

For Example: In 3:10 to Yuma, the First Plot Point sees protagonist Dan Evans leaving the Normal World of his ranch on a dangerous mission to deliver outlaw Ben Wade to the train station in the town of Contention (from which Ben will be returned to the Yuma penitentiary). Once Dan agrees to escort Ben, he can’t take it back—both because of financial stakes and because of the danger represented by Ben and his outlaw gang. The Third Plot Point then offers an even more dire threshold when Dan and Ben arrive in the new setting of Contention, only to discover it is a lethal trap which Dan must fight his way through in order to get Ben to the train.

For Example: In Children of Men, the protagonist Theo’s estranged wife is shot while escorting the girl Kee to safety. This death of a loved one permanently engages Theo in the conflict which he had previously resisted, as he carries on his wife’s mission. The Third Plot Point doesn’t feature a significant death, but it features the threat of death, both via Theo’s scheduled execution and Kee’s kidnapping.

The First Plot Point represents the protagonist’s departure from the Normal World. Thematically, the Normal World might be thought of us as The World Where the Lie Worked. From here, although the protagonist will still try to live by this outdated life philosophy, the conflict will progressively force her to face a new reality. The Midpoint will offer a Moment of Truth, and the Third Plot Point will follow it up by mirroring the First Plot Point in another thematic pivot, this time into The World Where Only the Truth Works. If the protagonist can accept and integrate the new life philosophy (via the Third Plot Point’s Death/Rebirth), she will emerge at least personally triumphant from the main conflict.

For Example: In Jane Eyre, the titular protagonist spends the First Act in a world governed by her Lie—that “love and security can only be bought at the expense one’s free will and personal sovereignty.” She then enters the Second Act—which takes place entirely at Thornfield Hall, where she is employed as governess by the mysterious man with whom she will fall hopelessly in love. There, she begins learning the Truth about true love. But not until the Third Plot Point forces her out of Thornfield Hall, via her lover’s lies about his previous marriage, is she forced to fully claim her Truth that “I have as much soul as you—and full as much heart!”

1. How Do the Events of the First and Third Plot Points Create “Doors of No Return” That Will Forever Change Your Protagonist?

The best plot points are plain in their irreversibility. They create turning points that are dramatic simply because they cannot be easily undone. Examine your First Plot Point for ways to create a definite threshold between your story’s Normal World and Adventure World. This does not necessarily mean the protagonist must leave one setting and enter another. But if he remains in the same setting in the Second Act, his relationship to that setting and the people in it should be be dramatically changed in some way.

2. How Do the First and Third Plot Points Feature, Foreshadow, or Symbolize Death/Rebirth?

The Death/Rebirth symbolism of the First and Third Plot Points is foundationally grounded within the irreversible transition of the Door of No Return. The protagonist’s old life has died (however subtly), and a new life has arisen. Consider how you can deepen this important symbolism. Is it reasonable to feature an actual death at either of these plot points? You may also choose to utilize “lesser” deaths, such as the death of a relationship, job, or even ideal. The “death” that occurs at the First Plot Point will foreshadow the more final “death” at the Third Plot Point.

3. How Do the First and Third Plot Points Pivot the Protagonist’s Relationship to the Thematic Lie/Truth?

Likewise, how will the Third Plot Point represent the death knell of the Lie—either because the protagonist rejects it in exchange for the Truth, because the world around her rejects it, or because she insists on holding onto it even though it has proven its ineffectiveness?

Next week, we’ll take a look at the important similarities that link the First Pinch Point and the Second Pinch Point. Happy writing!

Previous Posts in This Series:

Wordplayers, tell me your opinions! What are some important parallels between your First Plot Point and Third Plot Point? Tell me in the comments!