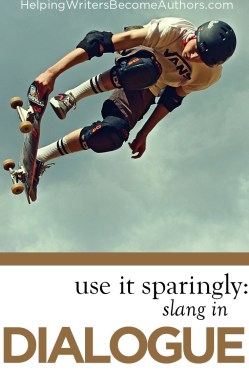 Slang in Dialogue: Use It Sparingly

Note: I’m giving myself a quick autumn break this week, so am posting this shortie instead of the usual post and podcast. Enjoy!

It’s important for authors to get the nuances of slang in dialogue right. All our research into dialectal idiosyncrasies is time well spent if it means nailing the way a particular character speaks. Smart readers will always recognize phony speech patterns.

For example, readers of Young Adult fiction are notoriously good at spotting less-than-accurate character conversations. Because teen slang changes faster than almost any other part of our language, and because few adults know it as well as their young readers, YA writers work hard to get their dialogue right. But as in all genres, there’s such a thing as going overboard.

For example, I once read a paranormal novel written by someone who had obviously researched teen slang. She had the words and the nuances down pat. Her characters sounded just as you would expect high schoolers to sound. The only problem was that she let her mastery of slang in dialogue run her story right into the overkill zone. Nearly every line of dialogue in this short book contained some form of slang, often to the point of repetition. I imagine even teen readers were rolling their eyes when one of the characters said “dude” for the tenth line straight.

As with so many techniques in fiction, moderation is vital in dialect. This goes not just for slang—especially unfamiliar slang—but also for strange grammatical constructions and perhaps most importantly words purposely misspelled to reflect a character’s accent.

It’s hard to go wrong with moderation. When in doubt, always avoid overkill.

Wordplayers, tell me your opinions! Do you use dialect or slang in dialogue in your current story? Tell me in the comments!

The post Slang in Dialogue: Use It Sparingly appeared first on Helping Writers Become Authors.