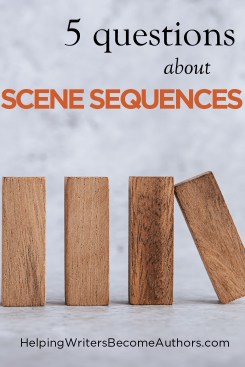 In many ways story structure is a fractal pattern. The same patterns we find on the macro level of the entire story arc also repeat themselves, within an ever-tightening spiral, from scene structure all the way down to sentence structure. Somewhere in between story and scene, we find scene sequences.

Within the story’s larger narrative, scene sequences bring a series of individual scenes together into a distinct narrative section, united by focus, location, and/or theme. Most writers instinctively and effortlessly employ the sequence as a way to execute character goals that require more than a simple one-shot solution. The result is both the opportunity for big set-piece scenes (such as we would usually hope to find at the three major plot points) and/or complex thematic discussions and character evolution.

Not too long ago, Wordplayer Eric Troyer emailed me about scene sequences:

I just finished Syd Field’s book Screenplay. [H]e wrote about something I haven’t seen before in quite the same way: sequences…. I don’t believe you’ve explored this before. If not, it’s something that might interest you. If so, I would love to read about it in your blog some time.

This made me realize the only material I’ve shared on scene sequences was in an interview on someone else’s podcast years ago when my book Structuring Your Novel first came out. Since I couldn’t find that interview anywhere, I decided now would be a good opportunity to talk about this important (and very fun) structural technique.

In his book (which is just as great for novelists as for screenwriters), Field introduces scene sequences by saying:

A sequence is a series of scenes connected by one single idea, usually expressed in a word or two: a wedding; a funeral; a chase; a race; an election; a reunion; an arrival or departure; a coronation; a bank holdup. The context of the sequence is the specific idea that can be expressed in a few words or less.

5 Questions (and Answers) About Scene Sequences

Let’s take a closer look at scene sequences by examining them in light of the following five questions (which were originally asked me in that interview I can’t find).

1. How Does Scene Structure Fit Into the Overall Idea of Story Structure?

Because scene sequences are built upon scenes, let’s first take a quick look at how individual scenes can be structured within the story’s larger narrative.

Although scene structure is an aspect of story structure that is sometimes overlooked, it’s a deeply intuitive concept to grasp. Classic scene structure, as encoded by Dwight V. Swain in his book Techniques of the Selling Writer, breaks scenes down into two parts: scene and sequel.

The “scene” section focuses on the protagonist taking action, while the “sequel” section focuses on the protagonist’s reaction to the outcome of his or her previous actions. The balance between action and reaction is a chief tool for maintaining a story’s credibility and the readers’ suspension of disbelief. For every action, there must be a reaction. For every scene, there must be a sequel.

From there, we can further break scenes and sequels down into three parts apiece.

We break the scene down into:

And we break the sequel down into:

The scene/action half begins with the character enacting a goal. He wants something. This desire is what drives the scene. Without a character goal, the scene will end up meandering and purposeless.

That goal must then be met with conflict. In this sense, conflict is nothing more or less than an obstacle. It’s something preventing the character from reaching the scene goal.

The outcome will be the resolution of that conflict, one way or another. Either the character reaches her goal or she doesn’t. I like to put the emphasis on disaster in the outcome because we don’t want characters to achieve their goals too quickly or too easily. If characters achieve too many scene goals in a row, they will inevitably achieve their ultimate story goal—and the story ends. You don’t want to give characters a straight road to their end goal. You want to push them sideways with scenes that end in disasters or “yes, but…” half-disasters.

Once you’ve hit your character with this scene-ending disaster, you will enter the sequel/reaction phase, in which you must then give the character enough space to react to whatever just happened. How does he feel about what just occurred? What is he thinking?

From there, the character progresses to dilemma. Whatever just happened, whether it seemed good or bad, will create a new problem—a new wrinkle in the character’s plan to reach her overall story goal. She must analyze her new dilemma.

Based on that, she will then make her decision. The decision will translate directly into the next scene’s goal.

If you get the basic structure of your scenes set up just right, every moment in your story is like a train on a track. Every moment perfectly influences the next.

2. What About Scene Sequences? How Do You Take Your Individual Scenes and Build Them One Upon Another to Create an Entire Story?

The scene sequence offers an important progression from the simple idea of scene. When focusing on the microscopic level of individual scene structure, it can be easy to start viewing each scene as a complete unit unto itself. This isn’t necessarily problematic, since the smallest integers of story are what slowly build up to a solid overall story. However, you can get hung up on the small stuff and start feeling like each scene is living in its own little vacuum.

This, of course, isn’t the case at all. Every scene must be integral to the story as a whole.  Every scene must matter to every other scene. Sometimes, you can take this principle a little further to start creating scene sequences.

A scene sequence can be thought of as a little story within the story. A scene sequence will have a unified focus, usually one we can sum up simply. As Field described in the quote at the beginning of the post, your sequence could be about a rescue, a wedding, a trial, or a battle.

Scene sequences should be given a defined beginning, middle, and end. They should have a mini-plot arc of their own.

As an example, think about the sequence in the original Toy Story movie in which the toys Buzz and Woody initially attempt to return to their owner Andy. The sequence begins when they’ve jumped out of Andy’s mom’s van and gotten themselves stranded at the gas station.

From there, we can see a linked chain of several different scenes in which they’re attempting various gambits to catch up with Andy at the restaurant Pizza Planet: they bum a ride on the Pizza Planet truck, they sneak into the restaurant, they spot Andy—and then the sequence ends when they get stuck in the claw machine with the Little Green Men and are “won” by the evil neighbor kid Sid.

These multiple related scenes combine into a distinct episode within the story—unified by the overall goal of trying to catch up with Andy while he’s still in town. In essence, the little scenes have become a bigger scene, which when combined with other “bigger scenes” becomes the entire story.

3. How Do Scene Sequences Affect the Major Plot Points?

More often than not, the First Plot Point (25%), Midpoint (50%), and Third Plot Point (75%) will be sequences rather than just standalone scenes. This is because major plot points are major moments within the story. They’re the set-pieces. They’re the big, juicy, interesting moments that readers wait the whole book to get to. You’re rarely going to want to buzz on by those major plot points in a single scene. The plot points will comprise big and involved events. As such, they’re likely to take place over the course of several scenes—a scene sequence.

This is always worth thinking about as you’re planning your major plot points. If an event comes to mind for one of these beats, but it’s something comparatively small that you can execute in a single scene, you might want to dig deeper. See if you can find something a little more involved, a little more complicated, a little more dramatic.

This is not to say plot points must be part of a sequence. Not all stories will require every plot point to be that in-depth. Study how other authors utilize scene sequences around their plot points, and listen to your instincts in your own writing.

One other thing to realize about the relation between scene sequences and plot points is that the very length involved in sequences—which can span as much as a hundred pages—allows for a little more flexibility in the timing of the plot points. Ideal story structure places the plot points at the 25%, 50%, and 75% marks within the story. This leads some writers to obsess about landing each plot point smack on the money.

However, in longer works of fiction, such as a novel, the pacing and thus the timing is more flexible. If any part of your major plot point sequence lands at its pertinent quarter mark in the story, you’re probably safe. This is because the scenes in that sequence are all connected. They roll their momentum one into another, which allows readers to still get the sense of the structural beat’s impact, even if the timing isn’t perfect.

4. Should There Be a Specific Number of Sequences Per Story?

No, there absolutely doesn’t have to be a specific number of sequences. Aside from the fact that every novel varies in length and pacing, how authors sequence their stories is very much a personal choice. The story must dictate where its going and what needs to happen.

For example, C.S. Lakin’s family saga Intended for Harm is told in the unique format of fifteen-minute segments of a family’s life over the course of thirty years. In this case, even though each scene is integrally related to the others, the unique format means there aren’t many sequences.

At the other end of the spectrum, you have the massive fantasies, such as those by Brandon Sanderson or Patrick Rothfuss. These books are packed with tremendous sequences in which plans are being enacted or battles are taking place. Big books like this might include upwards of forty or more sequences.

5. Do Sequences Have to Be Any Specific Length?

Nope to this too. Sequences don’t ever have to be any specific length. Technically, a sequence is simply more than one scene linked into its own little mini-narrative. A sequence could be formed of as few as two scenes. Or as in the above-mentioned big fantasy books, certain sequences might encompass a hundred pages and contain dozens of scenes. The final battle in Brent Weeks’s The Black Prism spans the entire Third Act and is comprised of a plethora of little scenes.

The length of your scene sequences will depend on the story you’re writing, how fast or slow you want to pace it, and how many big set-piece scenes you’re trying to work with.

Scene sequences can be one of the most delightful integers of story structure to work with, since they offer both the same tight control of an individual scene’s structure, as well as the vast creative possibilities of developing larger memorable units within the overall story.

Wordplayers, tell me your opinions! Can you think of some scene sequences you’ve included in your latest story? Tell me in the comments!

Click the “Play” button to Listen to Audio Version (or subscribe to the Helping Writers Become Authors podcast in Apple Podcast or Amazon Music).

Love Helping Writers Become Authors? You can now become a patron. (Huge thanks to those of you who are already part of my Patreon family!)